The Ice Chaingun is a black chaingun with blue streaks lining the sides of the barrels. It uses water as its main source of ammo. Water is fired by a high pressure pump, freezes into shards of ice when going through the barrel, and then melts, leaving water behind. The Ice Chaingun is very fast at unloading ammo. As its shots have very little damage, the user is advised to stock up on ammo. The Ice Chaingun will have a delay time before it actually starts shooting, so it is recommended that you prepare to fire before the enemy hits you.

For some reason, whenever AI pick up this weapon, they don't stop shooting it until there is no ammo left; even if there is no enemy in the proximity and there are several allies around. 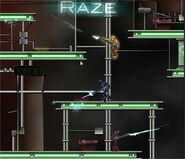 Notice how the bullets hit in the middle platform

The chaingun as it appears in the "Weapons Info" page

"A chain gun has a single barrel while a Gatling gun has several rotating barrels. It is a common error to refer to Gatling guns as chain guns, particularly in connection with entertainment such as video games"

-Wikipedia There was a mix-up in naming this weapon.

Community content is available under CC-BY-SA unless otherwise noted.
Advertisement