These great weapons can kill multiple people at once with three different ways, but they all have different dangers and disadvantages. Overall, these weapons are not to be underestimated if in the right hands. Here are the order from the most effective to the least effective of the Great Three:

Like the Rocket Launcher from Raze 2, this deadly splash weapon has a special glitch that enables to shoot right through walls if you stand in certain places. (usually thin walls and roofs) Be carful where you shoot with it, because it has a large blast radius and magnitude, so if you shoot too close you yourself you'll kill youself. This particular weapon also has such a large blast magnitude that it is possible to shoot through two walls if you've timed it perfectly, by first wall shooting the rocket through it, then when the rocket explodes on the first floor, it kills the person on the second floor. Its rockets travel in a slightly curved and relatively fast, but the rockets on Raze 2 travel slightly faster.

This gun is like a sniper rifle except that it can shoot through targets, and enables it to shoot multiple targets that line up. It can kill enemies in just 2 shot while shooting targets lined up together all at once. However, this gun only has three shots per clip, like the rocket launcher, and has been improvised into the Electro Bolt in Raze 2. This gun works best in Base, Abandonment and Stranded. These maps are long maps where targets can easily line up with each other for practising. A lot of Raze beginners dislike this gun because of its low firing rate, but experts recommend it.

An automatic weapon specialist's dream weapon. This weapon pumps out 60 rounds per second, and is great for "shooting" multiple enemies at a time. You might think that this Ice Chaingun is a piercing weapon, but instead, it has inaccurate projectiles that get pumped out so fast they form a conical firing line and has a firing line of up to 20 degrees at a time. The bullets are weak but firing rate makes up for it. 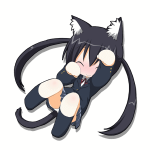 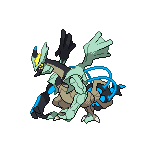